Thursday Thirteen #9 - Hen and Chicks of the plant variety 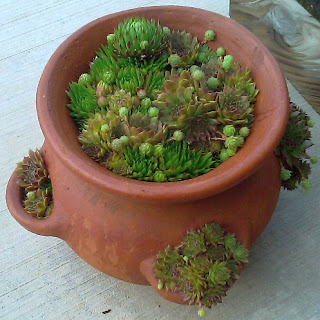 I know, it's Tuesday, but my schedule hasn't been cooperating of late, so I thought I'd try for early! ;)

I’ve become enamored of these hardy little plants (ok, some of them are hardier than others as I’ve seen first hand) and thought I’d learn a little more about them to share with you!

1. Hens and chicks are succulent evergreen perennials. This means that they have foliage that sticks around and keeps it’s color throughout the year, and that they live longer than annuals, which only live for 1 year. I’ve had my little pot of Hen and Chicks for going on 3 years now (maybe more) and they’re still happily multiplying away!

2. They are known for their rosette shape, which is actually more important than their blooms, and the way they propagate.

3. Upon maturity (usually around 3 to 4 years old) the plant will send up a single stalk that can reach 5-15 cm tall. The head of the stalk is a cluster of star-shaped flower buds 1-2 cm in diameter, which range in color from dark pink to yellow and that flower for several weeks. After blooming, the plant will die. Usually by this time it has produced many offsets ('chicks').

4. To propagate themselves, the Hen will send off miniatures of itself on shoots, these are the chicks. These chicks are easily transplanted, just carefully pull them away from the Hen, and replant where you want them, provided it’s in full sun to partial shade and in well-drained soil. Too much water is bad for these guys! 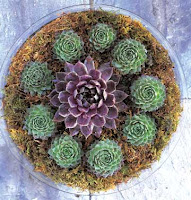 5. Colours range from lime green to burgundy to purple, and size varies from as small as 1 cm to as large as 20 cm across. The leaves can be thin and spiky or thick and rounded with a pointed tip. Some, such as Cobweb Houseleek, have fine spiderweb-like filaments that grow naturally from leaf edge to leaf edge, forming a white cover on the top of the plant, while others have fine hairs that cover the entire plant structure.

A popular planter for them is generally a strawberry jar, often terracotta with openings around the sides, but really as long as they are well drained and have sunlight, they will probably do well. They can go in the ground, or in just about any container really. This group is in a glass pie plate!

6. Hen and chicks are very popular for and well suited to rock gardening because of their hardiness, and shallow roots. They thrive in crowded conditions, provided they’re not being shaded out by taller plants. 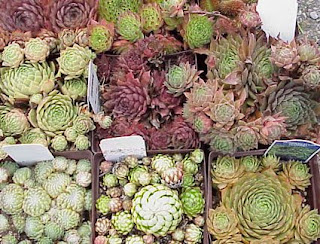 7. The Latin name for one of the many varieties (and there are many!) of Hen and chicks is Sempervivum tectorum. Sempervivum means “always live” hence the evergreen part of the name. Tectorum however means “on roofs” . Being indigineous to Europe, they were often planted in thatched roofs there, where they were supposed to provide protection against lightning-induced fires, due to the plants' association with two gods of lightning: Thor and Zeus (Jupiter). In this case, folklore is justified, in the sense that succulents such as hens and chicks are fire-resistant and would perhaps slow down the spread of fire through thatch.

8. another site listed: The Frankish King Charlemagne (742-814 CE) told his subjects to plant the herb on their roofs since it reputedly warded off lightning and fire.

10. They belong to the plant family Crassulaceae (krass-yoo-LAY-see-ay), that’s just fun to say, isn’t it? It’s in the same family as the jade plant. 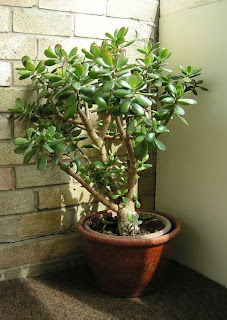 >Infusions are used internally to treat inflammations of the mucous membranes and has long been used to treat dysentery, diarrhea, worm infestations, and for heavy menstrual bleeding.

>Gargles of the juice may be used to treat throat inflammations, including tonsillitis and stomatitis (inflammations of the oral cavity).

>Traditionally, the leaves were chewed to relieve toothache and the juice sniffed to stop nosebleeds.

12. Here’s a store on e-bay that even sells them! I may have to keep track of her! I actually found this because I wanted to find more pictures that showed the variety and just looking at her list of things is pretty good! Mom's Hens and Chicks

13. This blog post has some pretty good pictures too (of hen-and-chicks, and well, half of the blogger in his underwear, but it’s not too hard on the eyes! ;) ) About a Boy and His Briefs, an his Hens and Chicks too!
And on that note, I’ll end this TT13! Thanks for stopping by!

Previously none of the pics were mine, but I've replaced the very top one with a picture of my own plants! They're just going to town as you can see, pushing and shoving each other!