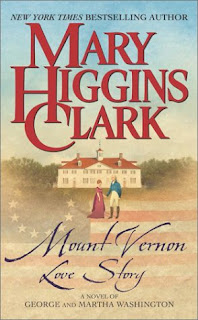 I admit that I have not read any of Mary Higgins Clark's other numerous novels, but I am interested in early American history, so this caught my eye. As the book opens, George Washington is getting ready to leave office as President. He is tired and ready to go home to Mount Vernon with his wife Martha, called Patsy. We glimpse his story from the time he is a young man until his time as President through recollections of the important events in his life. There isn't a cherry tree to be found in this story! Clark has made him a very real person, from his unaffectionate mother, to his unrequited love for the wife of a good friend, to the solid and steadfast love he finds with Patsy. This focuses less on the famous moments of his life, and more on the man, his feelings, and his constant struggle to find happiness.

I was interested to find out that this biographical novel was the first for Clark, and I do wish she had written more historical novels in the same vein. Maybe she will again. And maybe I'll even pick up one of her more popular mysteries, having now enjoyed this story! I definitely recommend it to American history fans, it is a quick and enjoyable read.
Posted by shaunesay at 9:29 PM 1 comment: 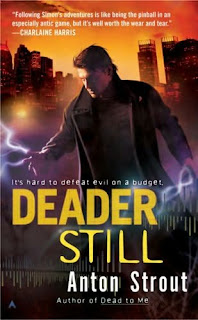 Today is actually release day for the 4th Simon Canderous novel by Anton Strout, Dead Waters. Alas I have only finished Book 2 so far, so that is what I'll be reviewing here. This is my 3rd read for the Horror and Urban Fantasy Challenge I'm taking part in hosted by Book Chick City.

"It's hard to defeat evil on a budget." This is the story of Simon's life it seems, as he is constantly bogged down by the red tape of the DEA (Department of Extraordinary Affairs) in his fight against the things that go bump in the night. What's frustrating for poor Simon, is hilarious for us as we watch him navigate his way through the DEA's bureaucratic maze, though things seem to go a little more smoothly for him now that he's a member of the Fraternal Order of Goodness. What is not going better for him are his personal relationships, either with his partner Connor, who is a little hurt and resentful of Simon's new status, or with his girlfriend Jane, who is being a little too friendly with her new boss. Not to mention there's a little problem of victims showing up drained of blood. It's possible that the 737 day streak of no vampire activity has come to an end. On top of that an old acquaintance from Simon's darker days has reappeared and is demanding that he help her with one last heist. Poor Simon can never have simple problems, they are always many layered!

This was a 4/5 for me, I'm really enjoying the Simon Canderous series so far, he's lovable, and very human (vs. superhuman), and always in trouble, poor guy, but he just keeps on whacking away at his problems, or sometimes juggling them, trying to resolve one while another is headed towards disaster, and arriving just in time to salvage that one too. I highly recommend them for a fun supernatural romp, and look forward to many more to come. Follow Anton on Twitter @antonstrout or at his blog What is Essential is Invisible to the Eye. He has a sarcastic wit, and is always entertaining, even in his agony over writing/working trials and tribulations. Thanks for a fun series Anton!
Posted by shaunesay at 9:24 PM No comments: 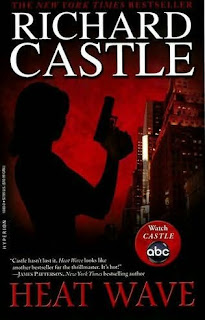 I'm not a huge TV watcher, but there are a few shows I enjoy when I happen to catch them, the mystery show Castle starring Nathan Fillion is one those. Heat Wave is the first Nikki Heat novel written by fictonal author Richard Castle (portrayed by Fillion) as mentioned in the show, and is the reason he's tagging along with Detective Kate Beckett and her team.

The novel features Detective Nikki Heat, and her writer shadow, journalist Jameson Rook. This is a stand alone story, having watched the television show is not necessary, however I think that fans of the show will probably appreciate the novel more, and be able to fill out the characters in their minds, than a non-Castle watcher. The same attitude is present, Rook rarely does what Heat tells him to, and usually gets in the middle of trouble because of it. The biggest difference to me is that Nikki Heat is much more aggressive than Beckett, and of course there is action between the two of them that watchers of the show only wish would happen between Beckett and Castle. But as we all know, it's that romantic tension that keeps a show exciting!

The story is not bad, Heat and her team are investigating the death of Matthew Starr, a financially troubled real estate mogul, who met his end off the balcony of his home. As expected many suspicious characters surrounded Starr, from his wife, to the mob, to his accountant, and the team is kept guessing until the end, when the killer reveals themselves, and of course Rook is right in the middle, no matter how many times Heat tells him to stay in the car, stay back, stay out of the building, just stay out of the way! As annoying as she finds Rook however, Heat can't deny her attraction to him, though she does seem to be able to compartmentalize her feelings while on the job, much to Rook's confusion and dismay.

I gave this one a 3/5, as police novels are really not my thing, and I did only read it because of it's relation to the show. Again, I think fans of the show Castle will get more out of this because they will certainly be imagining Beckett and Castle in the starring roles, but it is a complete story by itself, so someone who has never seen the show should be able to enjoy it as well. I will most likely read the next book in the series, Naked Heat for the same reason. I think it's funny that they've gone and listed the titles of Richard Castle's Derek Storm series, which doesn't actually exist.

This is my second read for the Mystery and Suspense Reading Challenge hosted by Book Chick City
Posted by shaunesay at 8:51 PM 1 comment: 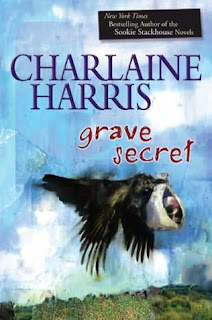 My first read for the Mystery and Suspense Reading Challenge hosted by Book Chick City is the 4th and last book of Charlaine Harris' Harper Connelly series, Grave Secret.

My immediate reaction was "No, wait! What? But! Well shoot!" Because I didn't realize that this was the last book, and that all would be revealed! I was all looking to see if Charlaine was working on another Harper book before diving into this one so I could put it on my wishlist. I'm a little oblivious I admit! But this is an excellent series and I'm very sad to see Harper and Tolliver's story wrapped up, even though we do receive closure and fairly happy ending for the two of them, as much as the dark tone of the story allows.

In this last episode, Harper and Tolliver are brought back near their home in Texas, hired by Lizzie Joyce to find out how her grandfather died. Harper does just that, also uncovering a few more family secrets in the bargain. This nearly costs Tolliver his life as someone targets Harper in an attempt to keep the family dirty laundry buried. Lovable and quirky Manfred also appears, because Harper needs him, even if she doesn't know it. Harper can't get over feeling that the men of the Joyce family that hired her seem very familiar, and eventually ties to her and Tolliver's own family past are uncovered, leading to a shocking ending.

This was an excellent series all around, and I found myself turning pages as fast as I could to find out the answer! Definitely a 5/5 rating, and I'm sad that it's over! I will have to console myself that I still have a few books left in the Aurora Teagarden series, and all of Lily Bard and Sookie Stackhouse ahead of me!

Visit the Charlaine Harris Website for more information on this author and her work!
Posted by shaunesay at 10:26 PM 1 comment:

Taming the Scotsman by Kinley MacGregor 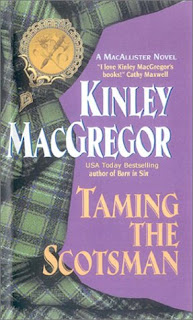 Taming the Scotsman is the 3rd book in Kinley MacGregor's MacAllister series (according to the reading order on her website), but I believe this can be read as a stand alone. While I have read 2 of the other brothers' books, I didn't really need to know their history to enjoy this one, the backstory was present when needed. This is my first read for the Historical Romance Challenge hosted by Romance Book Junkies, and it is set in Medieval Scotland.

Ewan is the brooding and surly brother in the MacAllister family. He blames himself for the death of his brother Kieran over a woman that betrayed them both. He lives away from the rest of the family in a cave, constantly punishing himself for what he believes he caused. It is to Ewan that Nora runs to try and get away from a betrothal that she knows will make her life miserable. She has no idea of the history that Ewan berates himself for, and shocks him by asking him to do the very thing that caused all of his previous trouble. She needs him to escort her to England, just as he had done with the treacherous Isobail, whom he and his brother Kieran had fought over. Nora likens Ewan to a bear, big and grumpy, and he fears that her incessant chatter will drive him insane, nevertheless he agrees to take her to his brother Lochlan to see what can be done. Along the way there are the usual adventures, kidnapping, fighting and escaping, during which the two grow very fond of each other. Though their attraction is strong, they are plagued by many misconceptions of class, family and prior commitments, and so there is much of the I love him/her, but cannot have him/her, and he/she will be better off without me anguish that we are so fond of in romances.

I'll give this a 4/5 because it's just the thing when you're looking for a fast paced historical romantic escape. For more information on the author and her work, see her website: Sherrilyn Kenyon yep, they are one and the same!
Posted by shaunesay at 10:44 PM No comments:

And the Winner Is...

Today is the day! I had a great response on this one, I guess everyone wants to read about a break up company around Valentine's Day! lol!

Who is currently reading: Brava, Valentine by Adriana Trigiani

Congrats Jen, I'll be contacting you to get your addy so I can get Your Big Break on the way to you! Thanks for entering everyone!

My friend Susan is hosting a great giveaways right now as well! She is giving away a copy of Michelle Moran's novel about Madame Tussaud, plus some adorable cupcake earrings. See post for details right HERE.
Posted by shaunesay at 4:24 PM No comments: