Giveaway Winner for Confessions of a Werewolf Supermodel...

Bailey thought a good job for a werewolf would be something in the forensics field, given the heightened senses, and I would have to agree! I think that's an awesome idea for a new show, CSI: Werewolf!

I'll be contacting you soon Bailey to get your snail mail address. Thanks everyone!
Posted by shaunesay at 9:31 AM No comments:

I posted a link awhile back for a hummingbird cam, where viewers could watch Phoebe, the Allens hummingbird building her nest and laying eggs. The poor dear has had a rough season, with her eggs turning out non viable, or getting stolen by other birds, she's fought off lizards and squirrels, and just kept on tryin'! Well finally on this season's probably last attempt, she's had some joy, and the two eggs she laid have hatched into Hope and Hoku, who just get bigger every day!

I borrowed this picture from the picture gallery of Phoebe, click on it to go to the webcam site and see Phoebe and her little ones live! (You can also donate to the site, which I will do now, since I've watched it pretty extensively this season!)

Watching Phoebe has gotten me excited about hosting hummingbirds, or at least attracting some of my own. Phoebe makes her home in her host's rose bush in what appears to be a pretty sheltered courtyard in California, where she never has to migrate. I'm in Kansas, with pretty harsh winters, so while at first I was all "awesome, I'll just get me a red rose bush and voila!" that's probably not terribly realistic. Until I've fenced in my backyard, done more landscaping and added some feeders, it's not very likely I'll have my own hummingbirds. However, last year, I just happened to be passing by my front windows and noticed a blur outside one day, so when I stopped to take a look, there was a hummingbird, checking out my flowers! Remembering this in my Phoebe-fever, I've gotten some more of those particular flowers (shown below), so maybe I can at least be a stopover for any hummingbirds traveling by! One of the moderators of the Phoebe site had posted a link in the chat that talked about what flowers attracted hummingbirds, and sure enough, my flowers were at the top of the list! Here is that link if you are interested.

Thanks so much to the Phoebe team for sharing her with an international audience, she's beautiful, and an awesome spokesbird, and she doesn't even know it! ;) 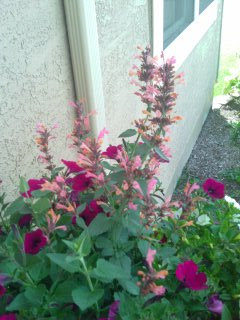 Shaunie's flowers, Agastache 'Firebird' (the tall ones in the center, kind of pink and orange long narrow flowers shooting off from the center stalk) Alright hummingbirds, come on, I'm ready! :D
Posted by shaunesay at 3:17 PM No comments:

Giveaway - Confessions of a Werewolf Supermodel by Ronda Thompson 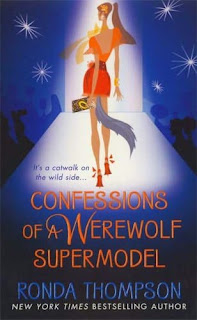 Lou Kinipski is a supermodel, one of the best, but she wasn't always one of the beautiful people. Her secret? She's a werewolf. But unfortunately while being a werewolf brought her beauty, it also has a few drawbacks, like furry outbreaks at really inopportune times. only her best friend Cindy knows what she is, and the two have stuck together through thick and thin since they were kids.

They have a great life, not perfect, but good, living next door to each other in the same apartment building, Cindy doing makeup for all of Lou's photo shoots, giving them an easy way to stay together all the time. Until a few murders and Detective Terry Shay throw some chaos into their lives. It seems the victims resemble Lou, and it looks like they've been torn apart by some kind of animal. Terry is convinced that Lou is somehow connected, and thinks she knows more than she's telling, which is true, but who would believe the truth? She's never known anyone else like herself, and she certainly isn't a murderer! Lou decides to check into her own mysterious and less than happy past to see if she can find any more answers, by hiring PI Morgan Kane to see what he can dig up. He's less than squeaky clean himself, and Detective Shay tries to warn Lou away from him.

Lou is a fun cross of girly-girl and no-nonsense, and it would have been fun to see what further mischief she got herself into. Sadly Ronda Thompson passed away in 2007. She also wrote The Wild Wulfs of London series, along with quite a few other stand alone novels.

I'm ready to pass along my gently used Bookcrossing labeled copy of Confessions of a Werewolf Supermodel to make a new friend! While I would love it if you did make a Bookcrossing journal entry when you receive the book, it is yours to do with what you like, and the entry can be made completely anonymously. Click on the Bookcrossing link above to learn more. To enter, please comment on this post and answer this question "What do you think an ideal profession for a werewolf would be?" Obviously being a supermodel is kind of challenge if you might break out in fur at any time! I will choose a winner on May 29th!
Posted by shaunesay at 5:37 PM 7 comments: