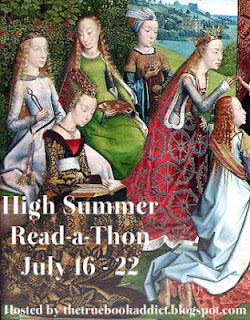 I'll be taking part in the High Summer Read-a-thon hosted by Michelle the True Book Addict. She has started new blog just for her read-a-thons called Seasons of Reading where she already has the next few read-a-thon dates posted! There will also be Twitter chats, she's polling now to see when!

No goal this time, I'm just going to see how I do!

Not my best showing ever, but it'll do!

The Last Stormlord by Glenda Larke 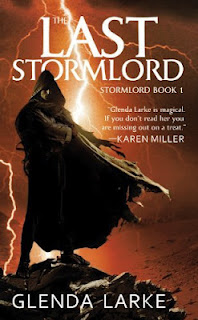 I hadn't read a good fantasy epic for awhile, and The Last Stormlord by Glenda Larke was near to hand and recommended by a friend, so I picked it up. The near waterless setting of the book was really in tune with the 100+ degree weather we've been having for awhile now, so I think it added some realism as I was reading! This is the first of the Watergivers series, and I really enjoyed it, and have already gone out and bought the next one! The world building was interesting and complete, the characters were filled out not flat, and the story was fairly simple and solid, not too complex with too many threads to keep track of as sometimes happens in the large epics.

The basic premise is that the current Stormlord, who is responsible for delivering all the water to the different lands through manipulation of storms is dying, and there is no one strong enough to replace him, including his own son. As he weakens, they are faced with many difficult decisions, such as cutting off water to certain parts of the land which can only end in the death of those people. A search is organized to once again try to find any children with water sensitivity in the hopes that one of them may yet prove to be the Stormlord they need. While all the Rainlords are outwardly united in this task, there are hidden agendas for some prompting them to ally with those who would like to see the land fall back to a time of random rainfall.

Caught in the center of the plotting are Shale, a strong but imperfect water sensitive from the Gibber lands, and Terelle, a girl of mysterious ancestry who learns she has talents she never dreamed were possible, but that come with a serious cost. Thrown together accidentally, they both find in each other what they never had before, a trusted friend, but they are torn apart before they can understand what they mean to each other. The first book ends with an all or nothing battle that had me quickly scanning the excerpt of book two to see who makes it through! There's treachery and unrequited love (only it is, they're just too stubborn to admit it until later on), magic and action, it's all here! Give it a try! Visit Glenda Larke's Website to learn more about the author and her books. She sounds like a very interesting lady, very busy, but somehow she still found time to write this hefty story!
Posted by shaunesay at 5:51 PM No comments: