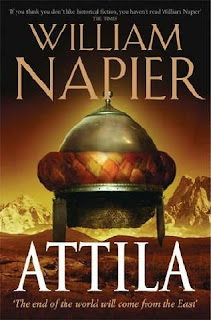 Attila is the first book of William Napier's Attila the Hun trilogy, and takes place during the boyhood of the legendary conqueror. The story opens while Attila is a political hostage in Rome, to ensure the cooperation of the Empire's new Hun allies, a barbaric tribe of horsemen that have a fearsome fighting style never before seen.

Attila is unhappy in Rome, far from the open skies and grasslands of his home, and attempts escape at every opportunity. He is extremely proud of his heritage and very derisive of the Roman way of life, chafing at the constraints put upon him. While to the Romans Attila comes across as a troublesome child, we see right away that he is very serious and determined to make it back to his homeland. From the first he is a brilliant strategist, but is occasionally tripped up by the impulsiveness of his age and his pride.

Despite his dislike of all things Roman, Attila does come to respect and trust Stilicho, a Roman general, and his wife, viewing them as surrogate parents. They too feel deeply for the boy, but are no match for the intrigues of the court. Attila finds himself bereft of the only people he trusted, and at the mercy of the Emperor's paranoid sister, the true mind behind her ineffectual brother's rule, who has taken a complete dislike of him. Attila makes another unlikely friend in the Roman soldier Lucius, as they survive an ambush together. Attila ultimately does return home to the Huns, but faces unexpected challenges once there that continue to shape his personality and purpose.

I truly enjoyed this story, the character of Attila is single-minded in his purpose, and yet complex in his emotions. Stilicho and Lucius and characters that pull the heart strings, completely loyal to their ideals and companion soldiers, yet betrayed by Mother Rome. It is this nobleness of character that Attila respects in these men, enemies by culture, but allies by circumstance. There is also a wry and sometimes desperate humor present between Attila and the soldiers. I recommend this to lovers of historical fiction, and look forward to reading the rest of the trilogy.

*I received my copy of this book as a giveaway on Goodreads.com, given by St. Martin's Press.
Posted by shaunesay at 7:49 PM No comments: