Chick with a Charm by Vicki Lewis Thompson 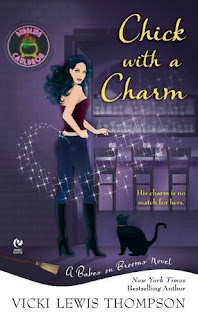 Chick with a Charm is the second book of Babes on Brooms by Vicki Lewis Thompson, and focuses on the younger Revere sister, Lily.

Lily is the wilder, more outrageous of the two sisters, dark haired and flashy, in her clothing choices and her decorating style. She has her sights set on Lawyer Griffin, who comes into the Bubbling Cauldron where she bartends every day after work with his buddies. He seems to be interested in Lily as well, but never acts upon it, so she decides to take things into her own hands by slipping an adoration elixir into his drink. Lily is everything that straight-laced Griffin shies away from, but he is still attracted to her. Suddenly his attraction becomes unmanageable and he finds himself unable to stay away from her. The two are thrown into a passionate affair that he just can't understand, it's so unlike him. His friends are soon noticing that his work is affected, and take it upon themselves to investigate, discovering that witches are real, and their pal is under a bonafide spell! Griffin may have real feelings for Lily, but the problem is that he can't trust himself until the spell is broken. Lily also realizes that what they are sharing, while amazing, isn't necessarily real thanks to her spell, and while Griffin is saying and doing all the things she's longed for, they pale when prompted by the potion and not his heart.

With a little help from all their friends, Kevin's work buddies, Lily's sister and her fiance Jasper (our victim from Blonde with a Wand), Dorcas and Ambrose, and a magical dog, the spell is eventually broken, and their feelings are put to the test.

The Babes on Brooms duo are sweet and fun paranormal romances. I have really enjoyed both of them and look forward to getting into more of Vicki Lewis Thompson's books. The covers are great, colorful and sparkly, my only complaint is that I think Chick with a Charm should have had Daisy the dog on the cover instead of another black cat, but I know the artists don't always have a lot to go on. I highly recommend both of these if you're in the mood for a fun and feel good romance with a bit of magic thrown in. No vampires or werewolves here, just good old fashioned wand waving and potion mixing!

Posted by shaunesay at 8:58 PM No comments:

Lover Mine by J. R. Ward 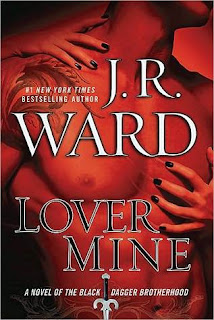 Lover Mine is the 8th book in the FANTASTIC Black Dagger Brotherhood series by J. R. Ward. Can you tell this is one of my absolute favorite series? ;)

There may be spoilers here if you're not as far along in the series.

This is John Matthew's book. Finally having transitioned from a scrawny pre-trans into an adult male vampire, John Matthew now has the brawn he's always desired. What he doesn't have is the female that he knows is his destiny, Xhex. Always fascinated by her, even before his transition, John Matthew's relationship with her has always been a rocky roller coaster. Xhex has swung between letting him glimpse her attraction to him, and shoving him violently away by cutting him to the quick emotionally. When Xhex is kidnapped during a raid on the Symphath colony, John Matthew's devotion is renewed to a fever pitch, and he will not rest until she is recovered.

I like how there are multiple story lines going on during these books. It's a fairly complete world, even though the main story is focused on a pair of the characters, other arcs are being furthered and set up at the same time, setting up multiple avenues for future books, making you NEED to read the next book! Past characters still appear frequently, though not figuring as prominently as we might like (More Vishous please!), keeping us in touch with beloved brothers, and occasionally their mates, though the ladies appear much less often.

I'm definitely looking forward to the next book, Lover Unleashed, featuring Vishous' sister Payne, since I may get more of a fix with my fave Brother. Lover Reborn should be very satisfying as well, featuring Tohrment, who has been suffering for several books now, it's about time he gets some happiness! *fingers crossed*

Thank you J. R. Ward for sharing this awesome story with us, it is one of my all time favorite series! *knows I'm gushing* For more information on the author and her work check out her website

Kiss of the Rose by Kate Pearce 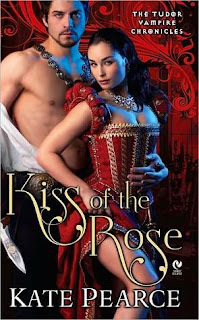 Kiss of the Rose is the first book of the Tudor Vampire Chronicles by Kate Pearce. Druidic Vampire Slayers and the Vampire Council, aided by the Ellis family of Druid Slayers must come together in the court of Henry VIII to catch a rogue vampire who threatens the King. Rosalind Llewellyn has been sent to court to find and slay the rogue vampire, upholding the pact that Henry's father made with the Druids in order to gain their help in winning the kingship. Also at court is Christopher Ellis, who comes from a family of Druid-slayers who serve the Vampire Council. Almost immediately Rosalind and Christopher are drawn to each other, though they are sworn enemies, and they try to fight their attraction, believing they could never be together. Rosalind's faith in the Druid ways is secure, but Christopher has doubts about his own chosen path, disillusioned in the vows he had made, but too honorable to set them aside. Together, with help from Rosalind's companion Rhys, and a vampire representative from the council, they work together to protect the King.

I feel lukewarm towards this one, having read The Other Boleyn Girl and watched much of The Tudors, I think I wanted that history to figure more prominently in this story than it did. What we need to keep in mind is that those were specifically focused on the Henry VIII story, while it serves as a backdrop here. Henry and Catherine are present, and the fact that Catherine is losing favor with Henry is also shown, as well as a bit of Henry's domineering character. In addition, I just didn't really bond with any of the characters except Christopher. His struggle with the disillusionment of his own convictions makes him a much more interesting character to me than Rosalind, Rhys, or the vampire who sort of helps them.

Overall it was an enjoyable read, though I got the feeling that the first book might have been more of a set up for what's to come, Henry VIII's story gets much more interesting when Anne Boleyn comes on the scene, which should be in the next book Blood of the Rose. It sounds like Anne will figure more prominently in the story than our historical figures did this time.

For more information on Kate Pearce and her work, please visit her website.

An Uplifting Murder by Elaine Viets 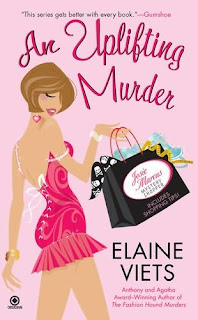 An Uplifting Murder is the 6th installment in the Josie Marcus, Mystery Shopper series. This time as Josie and her friend Alice are mystery shopping a lingerie store, they run into some people from Josie's past, a teacher from her school days, and another student who seems to be just as mean as an adult as she was as a kid. Shortly afterwards, they stumble across a body in the women's restroom, none other than mean girl, and Josie's investigation begins. There are many suspects, no surprise with the way she treated people, and Josie has her work cut out for her trying to save an innocent person from being blamed, as the police seem pretty convinced they have found the culprit, and aren't too interested in pursuing other leads.

Along with the mystery, we continue to be part of Josie's family, as the theme of this store is lingerie, we get to be part of Josie's daughter's growing up, and her mother's finally getting enough of the nosey next door neighbor, and of course, Josie's love life features prominently, but maybe this time she's found the one. We shall see!

I enjoyed this one as I have the rest of the series, Viets does a good job of making characters that we care about, and can relate to, in addition to a few that we just want to strangle. This is an entertaining cozy mystery series that I highly recommend.

For more information on the author and her work, visit her Website.

This was my 6th read for the Mystery & Suspense Reading Challenge hosted by Book Chick City (a fabulous blog that you should definitely follow!)
Posted by shaunesay at 6:08 PM 2 comments: