The Ruby Ring by Diane Haeger 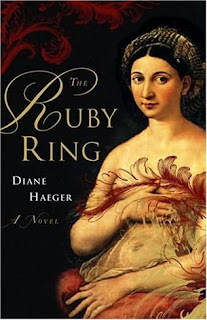 The Ruby Ring by Diane Haeger is a historical fiction romance inspired by a painting of Raphael's called La Fornarina (The Baker's Daughter). A ruby ring was discovered having been painted over on this work, and this novel takes that mystery and explores it, through a passionate and tragic love affair between the great painter and a common baker's daughter.

Raphael is at the height of his fame, with more commissions than he has time to fulfill, even with a studio full of assistants. He is constantly being pressured by all sides to work faster, by powerful bankers, political figures, and even the church. While each believes they should be the top priority, Raphael is obssessed with another work, a Madonna that he wants to find the perfect model for, but which he has searched for fruitlessly, letting other works languish. He finds his inspiration passing by on the street one day, in Margherita, out for a walk with her sister's son on her hip. Raphael knows immediately that she is the one, and asks to paint her, but she refuses, at first not believing that he is the great Rafaello, and still later, even after being shown he is indeed who he says he is. Her family finally convince her that it would be in all their best interests for her to go, and with her brother in law as escort, she goes to Raphael's studio to agree.

Pushed by her family, and confronted with Raphael's own obsessive feelings for her, she can no longer fight her own attraction to him, even though he is betrothed to the niece of a cardinal to whom Raphael owes much. The story is tragic, ending as it began with Raphael's death and Margherita's interment into a convent. It is the tragic story of two people who though finding love with each other, are reminded again and again that their lives are not their own, as factions who look down on her as a commoner try to tear the two apart, believing her to be a bad influence and a distraction from his painting. It is painfully clear that Raphael is valued not for himself as a person, but merely for the work he can produce to immortalize his patrons. Margherita is the one person who makes no such demands on him, and so she is the one person he is inspired to paint.

I really enjoyed this story, sad though it's ending was, it was still beautiful, and I wanted the two of them to find happiness so much! I've already picked up another of Diane Haeger's books, The Secret Bride: In the Court of Henry VIII about Mary Tudor, a sister of Henry VIII.

For more information on the author and her books see her website: Diane Haeger
Posted by shaunesay at 9:19 PM 1 comment:

And the Winner of a GC to the Animal Rescue Site Store is...

Congratulations! I hope you enjoy your shopping! Come back and let me know what you bought! I will contact you to get an e-mail address so I can forward your certificate to you.
Posted by shaunesay at 10:28 AM 1 comment:

Whew, that was a struggle there, but I got through it! Not the whole twenty four hours, but still a respectable showing I think! I confess, a lot of this last book I had to read standing up, right under my lamp, just so I wasn't falling asleep!

A huge thank you again to the organizers and the cheerleaders and all my other visitors, you made this such a fun experience, I'm totally in for the October read-a-thon!

Other Readers I visited and Cheered on:

Slow going on this one, so it will definitely be my last book, if I can get through it. Cat support is still going strong, but then, it's not too rough of a job when all you have to do is be in the same room as your person, and sleeping. Tough life, right?

Hang in there to everyone still going, I know I'm tired!

Sprawled across both computer chairs now, well, at least as much of the second one as I can get for my feet with two large cats already in it! The third cat is serving as my head warmer on the back of my chair! It's best lighting in here so hopefully I won't fall asleep!

Can I finish another one? Not sure, but I'm at least going to start it... maybe some more cookies will help! Getting tired and indecisive, so hubby picked the next book out for me from the three I couldn't decide between! lol!

Computer desk, chatting with hubby, sharing passages from the latest book, because it was a good one! 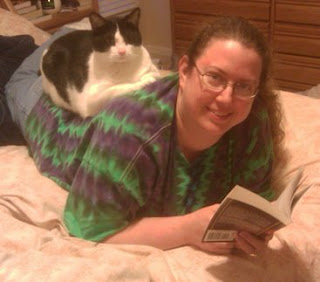 Just thought I would show this photo of my cat Fergus, showing his moral support of my read-a-thon efforts. Lest you think he's too uncatlike, I suspect what's actually going on here is him reminding me that he is in fact in charge, hence the sitting on top of me, and the reading will be tolerated only so long as it does not interfere with his needs.

My BBQ feast is nearly over, we got it later than expected, so no I haven't really been eating all this time! I'm ready to get down to some serious reading again!

on the bed again, waiting for the hubby so we could go out and get dinner (reference above cat picture where I am being reminded of my place in the world) and at the computer desk while eating the BBQ feast.

Wow, so we're halfway done with the read-a-thon, and I've managed to finish 3 whole books so far, really good for me, and actually better than I'd expected! I don't know if I'll make it the whole 24 hours, and I hadn't really intended to but we'll just have to see what mood I'm in as the wee hours approach! For now I'm still going pretty strong. About to take a break and go pick up dinner, the desired barbeque is going to be a reality, though I have to go get it myself, as the poor hubby is still tied to his work computer here at home! Blech!

I have to say the cheerleaders are awesome, I love all the rhymes, that makes it even more fun, so thank you to everyone who's cheering others on!

Good luck to everyone on the downhill side, keep up the great reading!

oh everywhere around the house, I moved around a lot!

Comments: Jehara's Get Up and Move Challenge

Going to do Jehara's Get Up and Move Challenge by walking on my treadmill! The great thing is, I still read at the same time, and I had already planned to do it at some point today, so now is as good a time as any!

I'm also starting to think about dinner, though my cookie snack will tide me over for a bit, big glasses of milk are filling! I'm kinda leaning towards barbeque.

Treadmill in the basement!

Oh no... book really cute, but getting sleepy... must wake up... time for extreme action... bless pre cut ready to bake frozen cookies...

Um yeah, the bed in a slightly dim with some afternoon sun room, better stop that right now or I'll be napping!

Lunch was tasty, the husband is finally getting some sleep (grr, as I said this, his phone when off again, unbelievable!), and I've got another book on the done pile! Now off to visit a couple people and then get back to reading! It's a gorgeous day outside here, sunny, green grass and all the trees in bloom! I'm hooked, and already excited about doing this again in October!

My living room love seat was pretty comfy, so I think I'll head back there once I'm done posting!

The errands are all done, I finished my first book, and now I'm going to sit down and enjoy a fine ham and cheese sandwich from Mr. Goodcents while I start in on book #2! Now to get down to some serious reading! Hope everyone's day is going well!

Probably the living room while I have lunch, then maybe the back patio, we'll see how windy it is!

nobody new this update, I need to get some more read, then I'll make some more visits!

Well, I'm not reading as quickly as I had hoped, but I'm doing okay. My poor husband is on call and was pretty much up all night helping clients, and it seems like every time he tries to get a little sleep, the phone rings again, so a few more distractions than I'd planned, but it's going okay. I'm about 2/3 of the way through book one, so I hope to have a finished book by the next update! I'm on my way out the door now to get an oil change and pick up kitty food (don't think they'd agree that a read-a-thon was a good excuse for furry kids to go hungry!). I should get some reading time in while waiting on the oil change though, going this late in the morning, it will probably be a bit of a wait! Keep up the great reading everyone, I look forward to visiting more of you later on!

On the go, the Ford Dealership waiting room, where I'm going to release a bookcrossing book too! heehee! shhhhhh!

About 2 hours around interruptions.

none yet, hopefully by the next update!
Posted by shaunesay at 9:30 AM 2 comments:

Where are you reading from today? -- Anywhere and everywhere! Mostly my home in KS, but I will be running a couple errands soon, and depending on what else happens today, I'm sure I'll be reading on the road to and from places!

1. I have three cats, Fergus, Tira, and Misu (the last two are sisters, and siamese/calico mixes who are just the right color for one of my favorite desserts, tiramisu! I know silly, huh?)

2. I used to work in a bookstore for about 4 years during highschool and my first year of college.

3. I'm a Bookcrosser, and a Geocacher, so obviously I like tracking things!

How many books do you have in your TBR pile for the next 24 hours? -- 11 actually, but that's mostly just to give myself a wide variety to choose from. If I get through just a few I'll be pleased!

If you’re a veteran read-a-thoner, Any advice for people doing this for the first time? -- nope, as I said, a first-timer, so I'm on the lookout for advice myself!

So far my comfy chair in the front room, back in bed (sprawled backwards of course, don't want to fall asleep!) and in front of the computer to check in on the 'thon!

about and hour around interruptions

none yet, hopefully by the next update!
Posted by shaunesay at 7:02 AM 3 comments: