I haven't gotten much reading done yet on the Challenge, but I have managed to catch some Christmas movies this week. Check out ABC Family because they are showing a bunch right now!

So far I have seen: 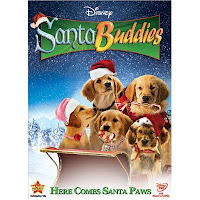 Santa Buddies was cute and definitely for kids. Puppy Paws, the son of Santa Paws, Santa's dog conterpart, wants to learn how to be a normal puppy and gets the "Buddies" a group of Golden Retriever puppies, in all kinds of trouble. Meanwhile the magic of Christmas is waning the longer Puppy Paws is gone from the North Pole. Finally they locate Puppy Paws, and with the help of the "Buddies" get him back to the North Pole where he is able to save Christmas.

The Muppet Christmas Carol is a classic. Michael Caine stars as Scrooge, with Gonzo narrating in the part of Dickens. All our favorite Muppets are there, it has catchy songs and it's just wonderful!

Snow 2: Brain Freeze stars Tom Cavanaugh, so if you were a fan of the TV series Ed, you should definitely watch! I need to go back and watch the first one where he becomes Santa. In Snow 2, he loses his memory, and so his wife Sandy must find him and help him to remember who he is in time to save Christmas.

All three of these were fun, and I definitely recommend them to help you get in the mood!

The first book I'm working on right now is Enchanted Season by Maggie Shayne, Nalini Singh, Erin McCarthy and Jean Johnson and is an anthology of paranormal romances. I enjoyed the first one so far and I've read all but one of these authors before, so I think I'll like the rest as well!

I hope to start getting my decorations up this week, I bought a few more spiral trees for my poor light up animals, so they don't feel so exposed! ;)
Posted by shaunesay at 8:12 PM 1 comment:

Vampire Crush by A. M. Robinson 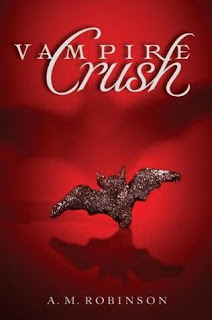 I received my copy of Vampire Crush through Goodreads First Reads giveaways.

Sophie McGee is ready to start the new school year, she is determined to be the Editor-in-Chief of the school paper and thinks she has a great shot at it with her investigative skills. Her teacher tasks Sophie and her Editor in Chief rival with interviewing the new kids at school, and a strange bunch they are. The new students are as odd as their names, and before long Sophie has realized that there is something off about them. Vlad especially seems to get whatever he wants from whomever he wants. The foursome don't keep up their charade of being new high school students very well, and Sophie puts her investigative skills to work to find out why they're really there.

Another mystery is that the house next door that has been empty for awhile, is now reoccupied. Sophie's friend James who used to live there has returned, but alone after his parents died, and he doesn't want anyone to know he's back. Predictably that doesn't last for long.

When Vlad starts dating Sophie's sister Caroline, it becomes even more important to find out what she can. Something is just not right about him, and she doesn't want Caroline to get hurt. In the meantime Sophie has inadvertently made friends with another of the new students, Violet, who speaks, acts and dresses old-fashioned. She's become fascinated by teen magazine surveys and advice on boys, as she has someone she's in love with, but can't keep.

So many things to find out, what happened to James while he was gone, how is he connected with the new kids at school, and why are they really there?

This was a cute read, but not anything that will stick out for me so I gave it a 3/5. I liked Sophie, James and Violet the most, Vlad the least, he was super annoying in my opinion. I prefer likable bad guys I guess. It's possible that it was just targeted towards a younger age group than I really enjoy and that I was expecting too much from it compared to all of the other teen vampire fiction I've read that is more complex and intense. Sophie is written with a fun sarcastic but light style, and I did enjoy it. I think as a debut this was good. The back of my copy suggests an age group of 12 and up, and recommends it to fans of Vampire Kisses and the Vladimir Tod series, with which I would have to agree.

For more information on A. M. Robinson, visit her Website.
Posted by shaunesay at 9:30 PM No comments: 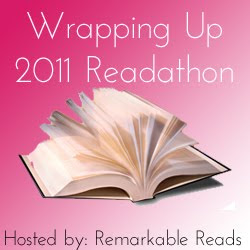 I found another read-a-thon to do!

This is the Wrapping Up 2011 Read-a-thon hosted by Jessie's Remarkable Reads It's her first time hosting, so lets make it a great one so she'll keep on doing it!

The read-a-thon lasts from December 22nd - January 1st. There is also a Twitter Hashtag to use: #WU2011R

It's coming up on that time of year again! The Challenge runs from November 21st through January 6th! Click the picture above for details. Come and join us!
Posted by shaunesay at 8:24 PM 1 comment: