A Murder in Time by Julie McElwain


I joined in the Big Library Read this round for A Murder in Time.  Time travel, historical fiction, a serial killer, it sounded interesting, and I'm glad to say it was!  It was kind of like Downton Abbey meets CSI.  It seems far fetched that anyone would have paid heed to Kendra's knowledge of a serial killer's reasoning, but that is smoothed over with The Duke, who is a bit eccentric himself, and willing to be open minded when others are not. I really enjoyed his character and would have liked to spend a little more time with him and his interests and hobbies in the story.  I also liked the lynch pin that belief in her story rested on for Alec, but I don't want to spoil that tidbit for anyone.

A Murder in Time was historically interesting, fast paced and kept me guessing!  I really wasn't sure who the murderer was. I'm glad to see that there is another book in the series coming next spring, to continue Kendra's story. 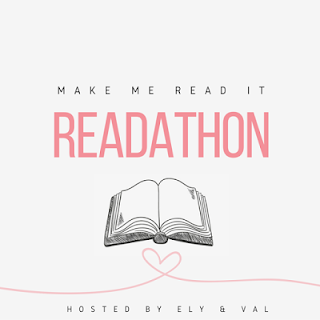 I'm taking part in the Make Me Read It Read-a-thon hosted by  The Innocent Smiley and Tea and Titles, were I gave a list of books I needed to get through and had the public vote, with the most voted book being my starting point.

The results are in and it's time for the reading to begin!

I've ordered the covers from most votes to least (left to right), though I really only expect to get through 2 maybe 3 at the most.  I have to admit I'm not really surprised by the winner and next couple down. Time to put the eyes to the page and see how far I can get!

Come talk with us at #MakeMeRead !

Updates:
So... pretty much I did terrible, thanks to Pokemon Go and just the book not going as quickly as I'd hoped, plus over extending my reading ability!  I did get to about 150 pages of Uprooted.  I really loved this idea, so I'm definitely in if there's another one!  hopefully next time no one will be releasing a super crazy popular game app at the same time! lol!

Posted by shaunesay at 8:00 AM No comments:

Email ThisBlogThis!Share to TwitterShare to FacebookShare to Pinterest
Labels: Challenges, Make Me Read It, Read-a-thon

I read this as a Kindle Unlimited selection and really enjoyed the whole trilogy! I love the magic system that the author has created, with the paper folding and the glass, and other elements, and was really able to visualize Ceony's work in her different lessons, with the ability to bring origami creatures to a semblance of life.  It was delightful!

I love both Ceony and Emery, their personalities and their relationship, and Emery's complex creations, which I won't mention because I don't want to spoil anything.  I feel bad that I'm only reviewing the third book, in case you haven't read the others, so I'm going to be very general and not really discuss plot.

I will say that Ceony always seems to plunge headlong into trouble, after being warned to stay out of it, but in her defense, they always seem to ignore her worries, which turn out to be worth listening to.  On the whole I felt this whole trilogy was very engaging and enjoyable, I was very pleased with the ending, and after reading the first book, I did go check out some origami books from the library because I was just in the mood to make something! lol!  I didn't end up getting around to it, but the desire was there!

I highly recommend the Paper Magician Trilogy as a fun, fairly quick fantasy read.  I believe these would be good read-a-thon fare as all three are around 220 pages each and move at a good pace.

Updraft was the June read in a Goodreads group I'm a member of called The Sword and Laser. It was an interesting world of bone towers rising above the clouds, where the primary method of transportation is for individuals to fly using what sounds like a type of hanglider contraption but with more detailed movement.  The picture above looks much larger and more framed than what is described in the book, in my opinion.  Not everyone flies, there are some bridges between towers, and there are flying traders that take goods between towers, of which Kirit's mother is one.  Kirit dreams of being like, and flying with her mother as a trader, but that is not to be, her fate lies elsewhere with other talents.

The structure of this world just brings up so many questions to me.  The bone is living, it grows, it fills in the lower spaces, the Singers can coax it to grow on the top of the towers, adding new living tiers.  So that hints at something very large living below the clouds that these bone towers, spires/spines? are a part of, doesn't it?  They are fairly sturdy, but they do sometimes break, toppling those who live there out of the sky, most likely to their deaths, what other outcome could there be?  What came about to cause a people to live that way?  I hope we learn more in the next book!

I liked Kirit, she knew exactly what she wanted, and it wasn't unreasonable.  The problem was there were so many secrets and past events stacked against her, she really had no chance of realizing her goals.  She was presented with many difficult dilemmas for young adult, and it seemed like the odds were constantly against her.  Sometimes the decisions she made were very unpleasant, in trying for the greater good, and there was a lot of weight on her shoulders.

Overall an interesting read with a very different structure of world, good characters and a plot full of intrigue.  I'm looking forward to the next book, Cloudbound, due out in September of this year.