Swordbird is taking flight, and going to visit...

Congratulations Cheesy, hope you and your son enjoy it!
Posted by shaunesay at 8:44 AM 1 comment:

Movie: Legend of the Guardians, The Owls of Ga'Hoole

I saw this movie poster tonight while out to see The Last Airbender. Guess I'd better get busy and read the books! The movie is due out this September. 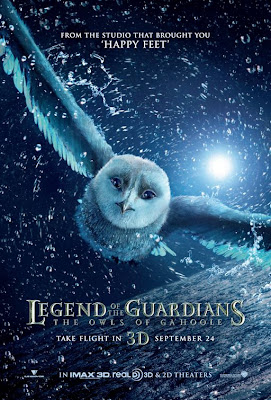 Check out THIS SITE to see the other movie posters for each of the owls.

For more info on the book series Guardians of Ga'Hoole, see Kathryn Lasky's Website
Posted by shaunesay at 11:31 PM 1 comment: 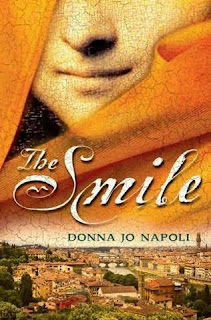 Donna Jo Napoli is a very prolific writer of children's and young adult books. As I've been devouring a lot of YA books lately, and have read a few of hers I wanted to put a little spotlight on her today! My most recent read of Napoli's was The Smile, pretty obviously from the cover picture a story about the Mona Lisa. This story centers around the early life of Elisabetta, as she learns some hard truths about life and love. Her family has a silk farm out in the country, and with her best friend Silvia, a servant for her household, she works and dreams of their lives ahead. She would never guess that she would catch the eye of Giuliano de'Medici. It seems the match would be perfect, but then a priest by the name of Savonarola begins wreaking havoc in the city, and the Medici family must flee. Elisabetta believes that Giuliano will come back for her, but she is still a young girl, and her father has other plans for her. The Mona Lisa painting happens in this book after Elisabetta is older, married and with her own children, where her smile captures all the lessons, good and bad that life has taught her. 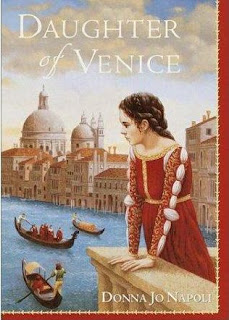 I seem be drawn by Italian history lately, and in addition to The Smile I very much enjoyed Daughter of Venice. Donata is one of 12 children, whose future likely lies in a convent, as only one son and one daughter will marry. Donata chafes at the life she has, wanting to be free to explore, she knows there has to be more than what lies inside their palazzo, and is not content to look out from the inside. Sneaking out disguised, Donata finds herself in the Jewish Ghetto in the city, and is befriended by Noe, who thinks she a boy. After many visits to Noe, working in his copywriting shop making flyers, Donata finds herself falling in love with him, as they've gotten to know each other better. Then the unthinkable happens, more than one daughter will be betrothed and the family chose Donata! Though unbelievable good fortune for the family, it seems a disaster to Donata, and she takes extreme steps to try and avoid it. She does not want to be a wife and mother, she wants to explore and learn! Like The Smile, I felt that Napoli has done an excellent job of bringing Italy to life, she's very descriptive and informative while telling the stories.

In addition to historical fiction, Napoli has done quite a few fairy tale retellings that have interesting twists. My favorite of these so far has been Beast, her version of Beauty and the Beast. I have also read Spinners about Rumpelstiltskin, The Magic Circle about Hansel and Gretel, and Sirena told from the point of view of a young siren who falls in love with a sailor that survived the wrecking of his ship on the way to the Trojan War. I'm excited to already have my next Napoli read in Mount TBR, and this one will be The Great God Pan, which I'm really looking forward to!

Check out a list of all Donna Jo Napoli's novels HERE at fantasticfiction.com, and also the author's website. I highly recommend her!
Posted by shaunesay at 8:45 AM No comments: 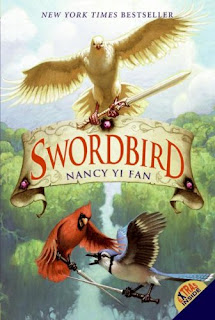 I admit it, the cover sucked me in to this book. There was just something about little sword-wielding warrior birds that was appealing. This is a kids book, and so, knowing it would be probably a quick and easy read, I chose it as my first book for Dewey's Read-a-thon that I participated in back in April this year. I'm already making a mental list of what books I may want to read for the next 'thon in October, but I digress (oh look, a butterfly!)

We learn in the author's note that Nancy was just a young teenager herself when she wrote and published this book, inspired by a dream of warring birds, and trying to deal with the terrorism of September 11th. This is a book about finding the truth, not letting evil have it's way, and restoring peace. I felt that it was a very solid story, and do recommend it. It is targeted towards the 8-12 year old range.

The Cardinals and the Blue Jays have been fighting each other, each side believing the other guilty of stealing their eggs. In actuality, it is the predator birds, led by Turnatt the hawk, who are stealing the eggs, turning the two sides against each other and enslaving the smaller woodland birds to build a fortress. Once this truth is known, the Cardinals and Blue Jays band together to stop the evil by working to summon Swordbird, a legendary warrior bird who has taken on near diety status to them.

I do love the illustrations, I think my favorite is of the cardinal carrying his bow and arrows, I just love the imagery!

I'm ready to pass along my copy of Swordbird to make a new friend. This is a gently used, Bookcrossing labeled copy, and while I would love a journal entry from the winner (which can be done anonymously if you decide that Bookcrossing is not for you) the book is yours to do with as you choose. To enter, leave a comment on this post telling me what your favorite type of bird is, with an e-mail address to contact you. No favorite bird, no entry! I will choose a winner on July 31st.
Posted by shaunesay at 10:53 AM 6 comments:

Giveaway for the Ethical Vampire Series at The Book Muncher

I finally took some time to catch up on some of the blogs that I subscribe to this weekend, and found this giveaway! I actually found it through Contests and Freebies which led me to the blog giving the books away The Book Muncher which covers Young Adult books.

Here are the details, and I'm only telling you cause I get an extra entry! ;)

1 lucky winner will receive The Society of S, The Year of Disappearances, and an ARC of The Season of Risks by Susan Hubbard. To fill out the form, and see how to gain extra entries go HERE The contest ends on 7/20/10 at 9:00 pm PST, and is for US addresses only.

Posted by shaunesay at 10:21 AM No comments: