I happened on this read-a-thon on Twitter today and couldn't resist, because I am a read-a-thon addict! Even though I don't think I get any more read than normal, it's an awesome way for an introvert social! So here we go with the Beat the Heat Read-a-thon!  Click the banner to be taken to the sign up page!  I will update here as soon as I figure out what I'm doing!

That will do it for me for the Beat the Heat Read-a-thon! I'm going to give myself a couple days to rest up for Bout of Books!
Posted by shaunesay at 10:55 PM 1 comment: 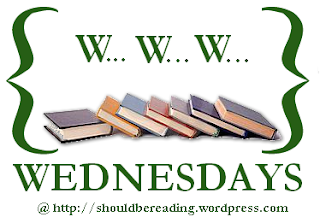 To play along, just answer the following three (3) questions…

Then head on over to Should be Reading and leave a comment with a link to your post so others can see!


Still working on from previous weeks:

I have recently finished:

I can't wait to see what the rest of you have been up to! Happy Wednesday!

I can't resist a read-a-thon, especially not one with such an appetizing title! My friends over at My Shelf Confessions are hosting the Books, Brains 'n Blood Read-a-thon as part of their Vamps Vs. Zombies month long event. The read-a-thon is just the first of many activities, giveaways, guest posts, challenges and a blog hop throughout the month, you definitely want to CHECK IT OUT!

I am typically firmly Team Vampire, I just don't get the zombie craze, but I'm going to try to read a book from each time for the read-a-thon.

For my Zombie read I have chosen Rachel Caine's Working Stiff (Revivalist #1). It doesn't look too zombie-ish but I'm going to ease into the genre! ;) 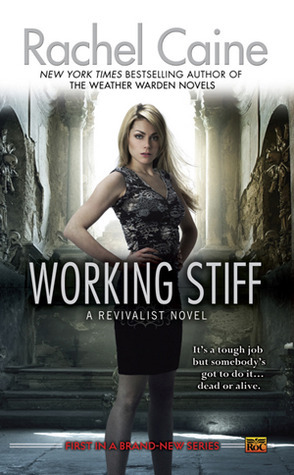 For my Vampire read I will finish off the Vampire Empire Trilogy with The Kingmakers by Clay and Susan Griffith. 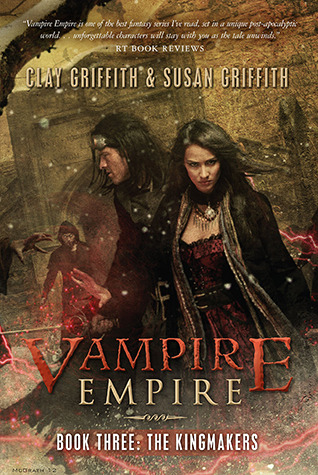 I doubt I will finish both of them, but we'll see how far I get!
Posted by shaunesay at 6:45 PM 3 comments:

I had 3 read-a-thons this week, and though I'm not sure I read any more than normal, I always have fun seeing what others are up to!

And here are my accomplishments, meager though they are!

My husband and I were fortunate to be able to take a road trip vacation this year through South Dakota and Wyoming. This is the first in a series of posts I want to do about the places we visited.

Badlands National Park was the first place that we went. Not knowing what to expect I was awed by the landscape, and couldn't help but wonder what travelers in earlier times, before the ability to share photographs, might have thought coming upon this with no warning. The area was established first as a monument in 1939 and redesignated as a national park in 1978. It is an interesting mixture of formations that came about through erosion, from buttes and pinnacles to spires.

Though desolate in appearance it actually is teeming with wildlife. There is a large praire dog colony around the edge of the northwest side of the park. We saw a few solitary buffalo in the distance, and got up close and almost personal with a bighorn sheep when it came up over the side to the top where we were standing. We just edged out of the way, and it continued on, I'm sure not as surprised as we were with the number of visitors that come to the park all the time. The area is also rich in fossils, some of the most important being those of early horses, allowing scientists to trace the evolutionary history from the 5-toed animals to the horses we are more familiar with today.

There is much human history in the area as well. The Ogalala Lakota of the Sioux Nation are co-managers of the area, and evidence of habitation stretches back into pre-historic times. In more recent times, the southern unit of the park was used as a bomb and gunnery range by the US Military.  This area has been returned to the Sioux, and while attempts were made to remove any unexploded munitions, I did see warnings in some media to be aware there may be more there and to alert rangers if they were found.  This area of the park is not as easily accessible as the main park, so we did not visit (we're not big hikers), but photos showed some very interesting formations there.

For more information on this area, see the official website for Badlands National Park and Wikipedia.  I also shared information from this Badlands book we picked up while there.  It is well worth a visit!
Posted by shaunesay at 8:00 AM No comments:

Email ThisBlogThis!Share to TwitterShare to FacebookShare to Pinterest
Labels: Vacation

Like many many others of you I am a fan of George R. R. Martin through his A Song of Ice and Fire series, beginning with A Game of Thrones. I discovered it almost 10 years ago, long before there was a show, and was drawn in. I knew he had written other books, I have a few on Mount TBR, but I had never seen The Armageddon Rag before.

So why am I featuring The Armageddon Rag? Well, first of all, I was curious to see what else GRRM had done and it's 30 years old. It only has 1,035 ratings on Goodreads unlike A Game of Thrones which has 468,650 ratings, so I thought chances were good that a lot of people like myself didn't even know it existed. I had one friend wonder how she had never heard of this one when I posted the link for friends to see on Facebook, and I said well, probably you had not heard of it because it might be older than you are! It may also have been out of print and re-issued because GRRM was doing so well later on. My final reason?  I like Rock Fiction and the cover was neat looking. ;)

Did I like it? Sure, it kept my attention, the story was solid though I didn't really connect with any of the characters.  But then one does not simply like A Game of Thrones either (insert picture of Sean Bean here).  In fact one is usually cursing that cruel GRRM by the end of it, even as you're reaching for the next book. There were a few spots where I was cursing him again in The Armageddon Rag, really man?  Did you really have to do that to him?!  So I guess there is one parallel between the two.  Otherwise, I honestly would never have known it was the same author, which isn't bad, it just shows what a broad range GRRM has written.


The book gives a huge nod to J.R.R.Tolkien, the band being named the Nazgul, the lead singer was nicknamed Hobbit and references are made to The Lord of the Rings in the songs and artwork of the band.  I'm of mixed feelings about that aspect, but in real life the work has been inspirational to many musicians from Led Zepplin to Enya so this feature of the story is not unrealistic.  By itself it is an interesting supernatural mystery in which the main character gets in touch with himself and what he really cared about by reconnecting with the friends of his past.  He becomes involved in a movement to bring the iconic Nazgul back to the limelight, narrowly averting a summoning of epic proportion by not allowing the history of the Nazgul's last fateful concert to repeat itself.

I definitely recommend it to those who are interested in all of GRRM's work, but not if you are specifically looking for something to get you through to the next book of A Song of Ice and Fire, it's just a completely different type of story.

It is available on Amazon right now, so possibly also at other places.  See GRRM's website for more information on the author and his work.

Email ThisBlogThis!Share to TwitterShare to FacebookShare to Pinterest
Labels: Fantasy

Random Reads: The Wretched of Muirwood by Jeff Wheeler

I was fortunate to be able to pick up The entire Muirwood trilogy as Kindle Freebies, they are currently at their regular price of $2.99 each. I moved The Wretched of Muirwood up in the TBR pile because a friend had just gotten done reading the trilogy and really enjoyed them. Since I trust her judgement, I decided to give it a try!

What I found was an enjoyable medieval setting fantasy, with characters I was interested in, and a little bit of mystery to keep me wondering. I can't imagine not only not knowing how to read, but not being allowed to know how to read, because of being an orphan. It becomes clear very quickly that Lia is special, with abilities that normal Wretched do not have, and she definitely marches to her own drummer. There is plenty of action and a little magic, somewhat explained but still mysterious, and Lia's adventure matures her quickly as she takes on responsibilities that a girl her age just shouldn't have to worry about, but there is no one else and so she takes charge. Lia and Colvin don't really care for each other at first, but come to be very close, facing their fears together.

The Wretched of Muirwood is well written, good character development and description of setting and events, with a solid and interesting storyline. I look forward to the rest of the trilogy, as well as the other work I see that is available. For more information on the author visit his website jeff-wheeler.com.
Posted by shaunesay at 7:00 AM No comments:

To play along, just answer the following three (3) questions…

Then head on over to Should be Reading and leave a comment with a link to your post so others can see!

I have recently finished: 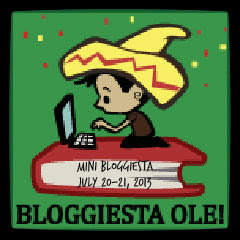 And so my first Bloggiesta comes to a close, and while I didn't get my whole list done, I do feel that I made progress and got some good ideas to work on.

Still to do or new ideas:


I really enjoyed my first Bloggiesta and hope to be able to join in the future.  It got me interested in blogging again and I'd kind of lost that for awhile.  Thanks everyone who hosted and dropped by to comment!
Posted by shaunesay at 12:00 PM No comments:

Email ThisBlogThis!Share to TwitterShare to FacebookShare to Pinterest
Labels: Bloggiesta

I am lucky enough (or crazy enough) to have 3 different read-a-thons to play in this week! 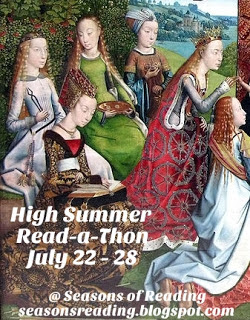 1. First up we have the High Summer Read-a-thon hosted by Michelle @ Seasons of Reading.  This one lasts from Monday July 22nd through Sunday July 28th. Our Twitter hashtag is #HSreadathon


2. During this time I'm also taking part in our 2nd annual Christmas in July Read-a-thon on Bookobssessed.  That will go from July 25th-28th.  We'll read some Christmas-y books and try to forget it's 100 degrees outside! :P 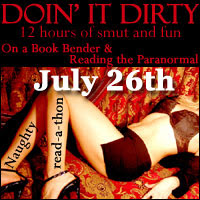 3. On Friday July 26th from noon to midnight is Doin' It Dirty 3.0, where we'll get our naughty on and read erotica for 12 hours! Well, Kelly and Amanda probably will, I might get more like 2 hours in, but just knowing that they are, and probably getting more fuel for some Great Literary Adventure Reviews is enough for me! The Twitter hashtag for this one is #DoinItDirty.

Here are the books I'm going to work on, but as we know, that can always change!