Shaunie's Little Garden - Where the Desert Meets the Sea

It's that time of year again! 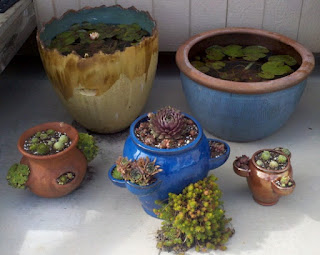 I have my desert-y Hen & Chicks in the foreground with my new second water pot with water lillies in the back. We discovered a fantastic water gardening store in Lawrence, Kansas called Water's Edge. It was so neat, healthy plants, huge variety, super knowledgeable staff, just very inspiring! 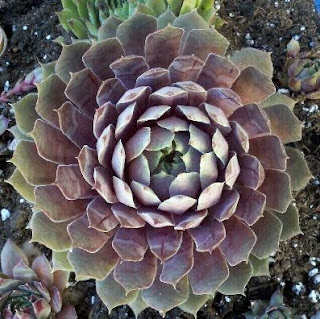 Here is a close up of that big Hen & Chicks in the center pot, it's just huge, and I can't take any credit for it being so lovely, because really I pretty much ignore them and they do their thing! I bought a couple of new types this year (though I have no clue what any of them are called other than Hen & Chicks) and re-potted a few, so I've got my fingers crossed that they will all flourish, sometimes they seem hardy and sometimes they don't! 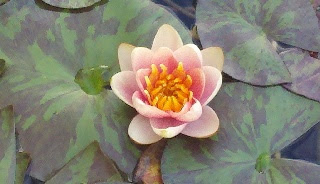 The first water lily of the season, not sure what kind it is, there is another one popping up, so I hope to be able to get some nice pictures of that one in the next few days fully open. I love them, but they are so limited-time-only! They are only open during the day, they close up at night, usually they're at about half-way closed by the time I get home from work, and not opened in the morning by the time I leave, then they only last for about 4 days. But I just think they are so neat looking!

We also bought some new Sea Kingdom denizens, as we decided the current ginormous goldfish we have were just too big to shuttle in and out and would be better off left alone in their indoor tank. The new kids are pretty quick and shy, and small, so no pics of them yet, but they are smaller versions of the one below, they are called Shubunkins and are a great fish for ponds and water pots as they are much cheaper than Koi, but still look pretty and can get pretty large! 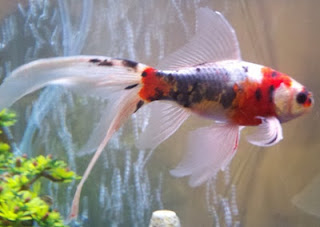 I think it's so relaxing to sit on the patio and be near these plants, the gently moving water, catching a glimpse of a fish now and then, the steadiness of the slow growing Hen & Chicks versus the quick change of the water lillies, I really enjoy them. :)
Posted by shaunesay at 7:26 PM No comments:

Email ThisBlogThis!Share to TwitterShare to FacebookShare to Pinterest
Labels: Gardening 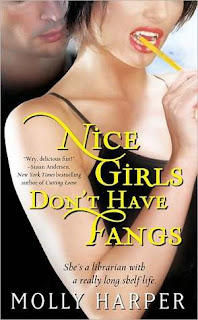 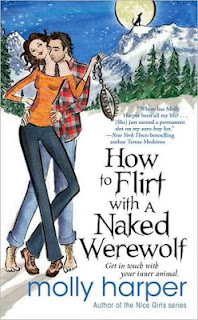 Molly Harper is one of the funniest authors I’ve found. I have thoroughly enjoyed the Jane Jameson series (yay there’s a new one!) and also her Naked Werewolf books. I can’t tell you how many times I would pester my husband by read parts out loud to him because they were so funny I wanted to share! She has quickly become a favorite, going on the short list of authors that I will automatically get a new release from. The books are full of great one-liners and witty sarcasm that prompt out loud laughter. If you are looking for fun and funny paranormal romance, look no further, Molly Harper is your woman!
Posted by shaunesay at 3:14 PM No comments: 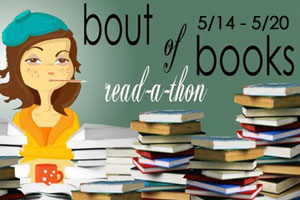 It's time for another Fantabulous Bout of Books Read-a-thon! This is my starting line post, and I'll update here as well. We'll be on Twitter too, using the hashtag #boutofbooks. Come join the fun!

I made my goal! I admit I made it pretty achievable since I had to work last week. Thanks again for our wonderful hostesses and I can't wait for the next one!