The Muse by Raine Miller 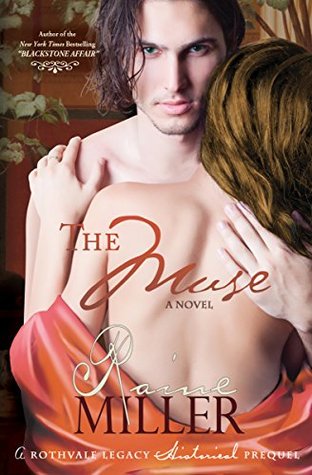 The Muse by Raine Miller
My rating: 4 of 5 stars

I received this through the Goodreads giveaways in exchange for an honest review.

I chose it because of the combination of historical romance and art that the synopsis promised, and also because one of the comments on it were from a fan of the Rothvale series, who really loved that series and was excited to have this backstory prequel.

I ultimately gave this a 4/5, but it was a struggle for me. It went very slowly to me until the last third of the book. Had I not felt that I needed to give a review of it, I might not have finished, but finish it I did, in tears, today at lunch time. I'm also now interested in the Rothvale series, which I realize is contemporary, but I think will be more full for me with this backstory to draw on.

There are some steamy sex scenes, which seem a little at odds with the formality of the characters to each other, but then I remind myself that culture is different now than it was then, and I need to stop comparing it to a married couple of today.

Graham and Imogene have both had a lot of tragedy in their lives, I always have a soft spot for damaged heroes, and there is plenty of that here. His fears of past events repeating themselves lead him to quite a bit of paranoia and heavy-handedness, while Imogene wants to live life to the fullest and know the truth of things, no matter how hurtful they are. Together they make a beautiful couple that are deeply in love, but sometimes deeply at odds as Graham tries to protect her from everything, and she stubbornly refuses to to play the docile lady for him.

An enjoyable read, and I'm looking forward to giving the Rothvale Legacy series a try.

View all my reviews
Posted by shaunesay at 10:57 PM No comments: