Audiobook: The Valley of Secrets by Charmian Hussey 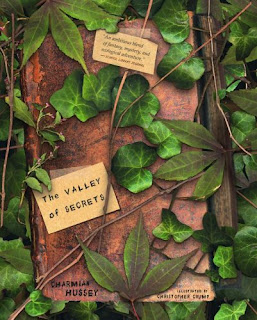 Stephen Lansbury is an orphan who receives a letter informing him of an inheritance. After his meeting with an odd lawyer, Albert Postlethwaite, who is extremely reluctant to answer any of his questions, Stephen travels to the mysterious estate to take possession.

The estate is strangely deserted, yet somehow things keep happening that make Stephen realize he's not quite alone. His exploration of the secrets Lansbury Hall contains is enchanting and often humorous, while his discovery of a family he would have liked to have known, just after his Great Uncle Theodore's death is poignant. The more he learns of them as he reads the Theodore's journals, written as a young man, the more he misses what could have been, but a great surprise still awaits him out in the lush wilderness of the estate.

The author is clearly also concerned very deeply about environmental protection, and works this into the story very well. She brings these issues to life by creating characters we can sympathize with, and demonstrating the destruction of the rainforest and it's indigenous peoples through their story.

Charmian Hussey trained as an Archaeologist at the University of London. So far I do not see any other novels, but hope there are some in the future!

Charmian Hussey at Simon & Schuster
Posted by shaunesay at 9:23 PM No comments:

Spring actually only lasts about 2 minutes around here and then goes right into hot and humid summer, but I'm ready for that too. We had 3 inches of snow last Saturday, and today we had a temp in the high 70's!

When the trees lose their leaves in the fall you begin to be able to see all the bird nests that were invisible before. That's when we discovered a little nest out in our front tree, and I do mean little! Not hummingbird little, but still quite small compared to what I commonly see. I kept meaning to take a picture of it because I didn't figure it would last long in the weather with no leaves to help shield it from the elements. Well, it's still there! I think it might be a finch nest of some kind we've been seeing several different ones around in the summer. I wonder if the previous owners will come back and use it again? I don't know anything about finches, I should probably read up. I'm seriously amazed it's still there, it's anchored, but doesn't seem by much! I've included a close up and a picture of the whole tree, so you can see how small it really is! Can you see it in there? Hope we get some new or return feathered neighbors soon! 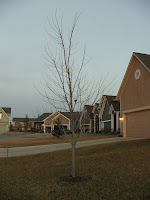 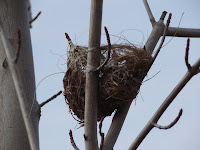 Posted by shaunesay at 6:40 PM No comments: 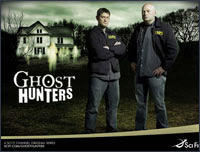 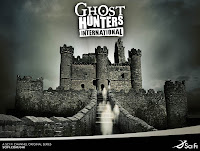 Wednesday night is Ghost Hunters night on Sci-Fi, and sadly I'm addicted, even though I can't see half the things they supposedly catch on video, or understand most of the EVP recordings, I have to have the prompt at the bottom to have a clue what they think they heard! Both Ghost Hunters and Ghost Hunters International is on during the evening, and my question to you is... which version do you like better?

Myself, I love all the interesting places that GHI goes to, but wow are they quick to proclaim a place haunted! I kind of want to see a show where Robb, Jay and Grant are all together and see what they decide, because the TAPS guys seem a lot more skeptical than GHI!

For more info on these guys, check out Ghost Hunters on SciFi, TAPS: The Atlantic Paranormal Society and GHI on SciFi (the downloads and gallery are funny, so dramatic! *giggle*)
Posted by shaunesay at 9:11 PM 3 comments:

We try to get together with friends Susan and Del once a month or so for game night. I think as adults we really lose sight of how much fun it can be to play games with friends, it's a good stress reliever if you can get together and laugh and have a good time. I've come to really look forward to these nights, they are a lot of fun!

Last night we pulled out a board game, Risk, one of those games where you have your playing pieces on different countries, trying to control as much land as possible and conquer the rest of the world as fast and as brutally as you can! Last night was no exception, and we witnessed the rise of a new superpower in the world. Deciding it was wise to pull back and regroup, Del prepared to make a stand on Madagascar, with so many armies that he actually had to use the lid of the piece box to contain them all (he's all the red down there at the bottom right of Africa, if it wasn't obvious!), maybe you just had to be there, but I thought it was hysterical! 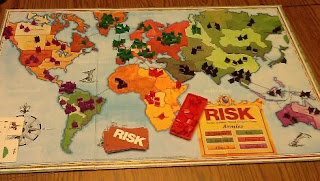 Now, I'm not a Risk expert, but I've played a few times, and I'm used to people holing up on Australia and then trying to make a stand from there, but not Madagascar! We were not going to get Del's lemurs no matter what! He controlled it for the whole game too, while I had to vacate my early hold on North America and head to Europe!

We actually ended up calling the game at 2 am, still not truly sure who would have won, as at that point, each turn can completely change who's got the upper hand! Thanks for yet another fun game night guys, I think we made Madagascaran history last night!
Posted by shaunesay at 9:17 PM 2 comments: